The Fair Debt Buyers Practices Act will require purchasers of consumer debt, debt buyers, to provide documentary evidence to consumers to ensure that debt buyer collection efforts involve the proper individual. Typically, debt buyers purchase bulk defaulted consumer debt by the thousands for pennies on the dollar. Debt buyers then frequently file a large portion of lawsuits on the alleged debts and claim to be the assignee of the debts. These debt buyer, debt collectors, prey on uninformed and/or unrepresented consumers and proceed with these lawsuits in the hopes that the consumer they have sued will not show up and allow a default judgment to be obtained against them. Once the default judgement is obtained, regardless of whether the debt collection efforts were directed at the wrong consumer, were for the wrong amounts, or beyond the applicable statue of limitations, these debt buyers can then seek enforcement of the default judgement by garnishing wages or other means of recovering from the consumer’s assets.

The measure now goes to California Governor Jerry Brown for his signature. Once signed, the new law would take effect on January 1, 2014. 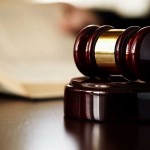 What is considered abuse or harassment by a debt collector?